What is the Doctrine of Discovery and why does it matter to The Unfinished Church?

The Doctrine of Discovery is the disturbing backdrop for almost all of the challenges explored in The Unfinished Church. It sets the precedent both in racialized laws and national policies as well as race-based theologies. But, when we understand its profound implications and intentions, we can work to undo them and promote the fullness of what it means to be an anti-racist church.

As you listen to each podcast, listen for how we can confront what are too often unchallenged and accepted foundational norms and world views supported by the Doctrine of Discovery. Discuss how when left unquestioned, the legacy of this Doctrine still harms our civic common good and the Beloved Community we seek to create.

Novelist Robert Faulker wrote, “The past is never dead. It’s not even passed.” The Unfinished Church will confront this nightmare of the past because these practices still inform our present.

Before Europeans came to North America, there were as many as 18 million Indigenous Peoples living on the continent. By the end of the 19th century, they numbered fewer than 250,000. Millions of people died because they did not have natural immunity to European diseases, nor could they resist the technologies of war the Europeans used to overpower and decimate native populations.

The Doctrine of Discovery was developed in the fifteenth-century by Spain, Portugal, and England as part of their empire-building projects. It was theologically rationalized by both the Roman Catholic Church and Protestant churches.

For 600 years, the Doctrine has been used by European nations and the United States to justify empire-building, nationalistic settler-colonial practices, and neocolonial occupation by appealing to White ethnocentric and supremacist claims of cultural, racial, governmental, and religious superiority.

How did this happen?

In 1436, Portugal convinced Pope Eugenius IV to issue a papal bull granting exclusive control of the Islands to civilize and convert the Canary Islanders to the “one true religion” and “for the salvation of the souls of the pagans of the islands.” In 1452, Pope Nicholas V authorized the Portuguese “discoverers” to invade non-Christian lands and to “capture, vanquish, and subdue all pagans and other enemies of Christ … to reduce their persons to perpetual slavery and to take away all their possessions and property.” (https://www.gilderlehrman.org/sites/default/files/inline-pdfs/T-04093.pdf)

In 1492, “by the Authority of Almighty God,” Pope Alexander VI granted to the monarchs of Spain and their heirs forever, “all islands and mainlands found and to be found, discovered and to be discovered, towards the west and south from the Arctic pole to the Antarctic pole And we appoint you and your said heirs lords of them with full and free power, authority, and jurisdiction of every kind.”

In 1493, Spain obtained papal approval for the “discoveries” Columbus made in the New World.  In 1494, Spain and Portugal signed the treaty of Tordesillas moving the line further west to give Portugal part of the New World, today’s Brazil.

In 1529, in the Treaty of Zaragoza, the countries extended the line around the globe and divided up the Pacific Ocean and its islands applied the Doctrine of Discovery to dive and conquer lands and peoples in Africa, Asia, and the Americas.

The landmark United States Supreme Court case of Johnson v. McIntosh influenced how colonial-settler societies defined Discovery and their “rights.”  The Court held that Native peoples could only sell their lands to Christian European American settlers who claimed the Discovery power over them. Settlers claimed the dominant right and duty to convert non-Christians to civilization. The Doctrine of Discovery has informed and affirmed these practices. https://supreme.justia.com/cases/federal/us/21/543/ 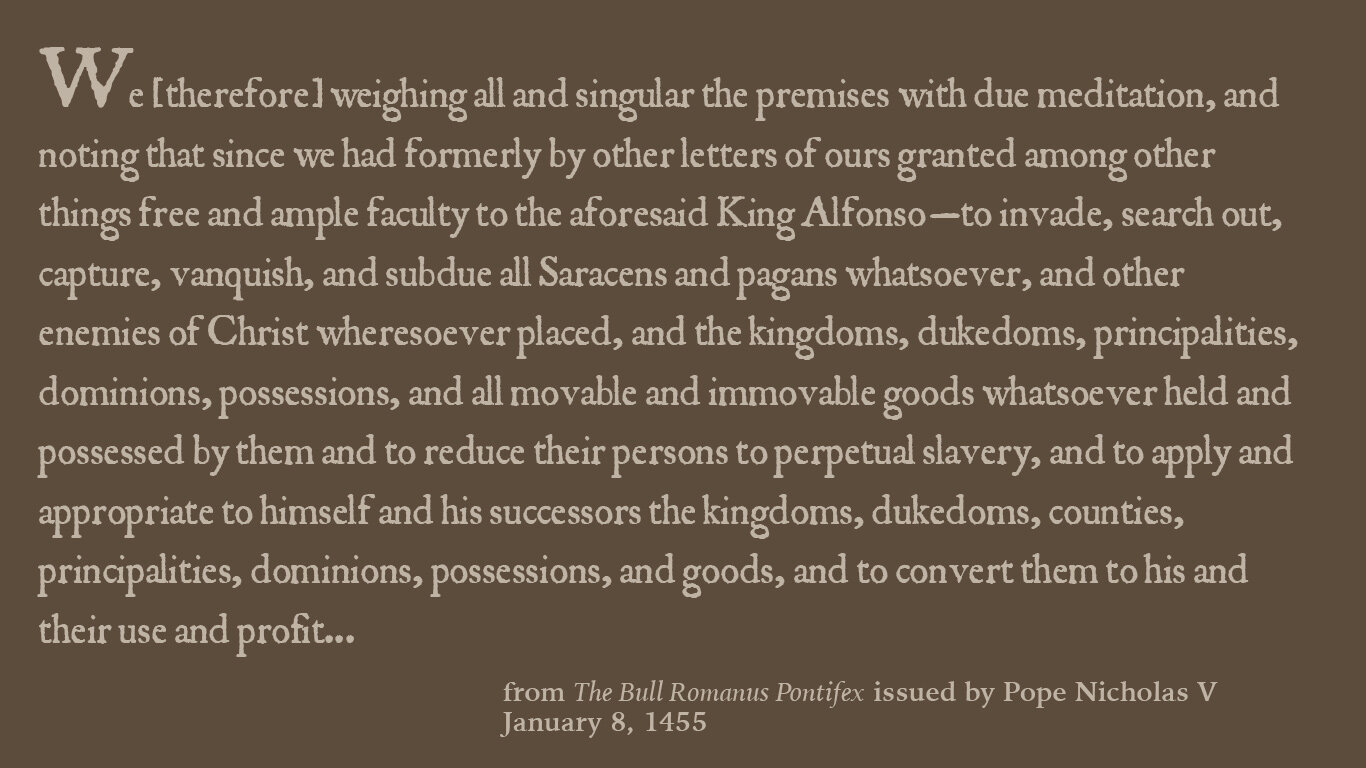 What are the intersectional principles or norms that the Doctrine of Discovery established as unquestioned law and practice?

Terra nullius.  This Latin phrase means “a land that is vacant or empty.” If lands were not  occupied by any person or recognized Christian nation. Terra Nullius also presumes that  “discovered” lands were devoid of humans if the original people who lived there are defined as “heathens, pagans, and infidels,” without benefit of Christian rule.

Settlers and governments considered these lands as their responsibility to claim and to tame. This Doctrine has been used to justify theft of land and relocation of entire races of indidgenous people and subsequently displaced African Americans and immigrant communities. Today, the legacy of redlining in housing and planning is an expression of terra nullius  (https://www.npr.org/2017/05/17/528822128/the-color-of-law-details-how-u-s-housing-policies-created-segregation )

Preemption.  Euro-American countries that claimed the rights of first discovery also claimed the power of preemption or the exclusive right to buy lands of Indigenous Nations and peoples. Indigenous Nations automatically lost ownership and self-determination of their lands. This Doctrine has seeped into economic practices that have a generational impact on communities of color by denying the possibility of building assets, power and access to natural resources. Preemption continues today in updated forms (https://www.epi.org/blog/preemption-laws-prevent-cities-from-acting-on-everything-from-labor-and-employment-to-gun-safety/)

Limited Indigenous sovereign. Indigenous Nations and peoples lost their sovereignty. Their rights to engage in international trade and treaties were curtailed. They could only engage politically and commercially with the U.S. government. This Doctrine has been used to create capaltistic monopolies that stifle community development and today appear in forms of gerrymandering and redistricting and voter suppression laws. This also centered political power and authority in majority White, well-resourced communities. Limited sovereignty delegitimized political agency, and led to even greater insecurity and division among extended families, displaced, repressed, or erased Native people’s faith, language and cultural expressions. The transgenerational trauma we see too often among Native peoples is rooted in this settler colonization practice. Limited soverignty still impacts communities today  (https://www.ncsl.org/legislators-staff/legislators/quad-caucus/an-issue-of-sovereignty.aspx)

Contiguity. A significant amount of contiguous land was claimed as Euro-American settlements. European-American claims were made to “unused” or unoccupied land thereby giving colonizers preference, possession and access to natural resources like water, minerals and land. Native people’s homes, schools, and sacred sites have been displaced, demolished,  occupied, erased using this claim to contiguity. This segregationist divide-and-conquer practice has been used in urban and rural planning, determining where houses are built and where people are able to study and work and where they have access to health care.

These practices are still perceived as “natural” and inherited privilege accrued by virtue of White European colonization. They are still used, albeit in varying forms today, to justify and to limit the sovereignty, property, cultural and human rights of Native peoples. Cumulatively, they continue to perpetuate preferential, racist policies that deny people’s full humanity and agency. An expression of contiguity today is in redistricting laws.  (https://redistricting.lls.edu/redistricting-101/where-are-the-lines-drawn/).

What does religion have to do with it?

The Doctrine of Discovery is undergirded by at least these theologies of entitlement and abberrant application of Scripture:

In the Americans, as in many places around the world, the Doctrine of Discovery has legitimated mining, fracking, logging, water theft, plantation agriculture, and other extraction industries that took resources from Indigenous communities to benefit the wealth of those descended from Europeans and colonial or postcolonial nations.

The Unfinished Church is a project to dismantle all forms of oppression and to promote antiracist practices that are embedded in our lived out expressions of faith and culture, policies related to education, work, health and access to human services, care for and use of public natural resources, and our governance including legislative and judicial processes.

We are called to dismantle the Doctrine of Discovery in whatever form it continues to manifest.

Faith-Based Statements on the Doctrine of Discovery

UMC 2016 Resolution on Native People and The United Methodist Church

World Council of Churches Statement on the Doctrine of Discovery

ELCA Repudiation of the Doctrine of Discovery

International Statements on the Doctrine of Discovery

UN Declaration on the Rights of Indigenous Peoples

UN Permanent Forum on Indigenous Issues: The Doctrine of Discovery

UMC Video Series “Stealing the Earth” the Doctrine of Discovery

Stealing the Earth Part 1: What is the Doctrine of Discovery?

Stealing the Earth Part 2: “Whose Land?” The Doctrinal Legitimization and Theft of the People’s Land

Stealing the Earth Part 3: Pervasive and Self Perpetuating, the Continuing Falsifying of Narratives

Johnson v. McIntosh, the Supreme Court under Chief Justice John Marshall upholds the McIntosh family’s ownership of land purchased from the federal government. It reasons that since the federal government now controls the land, the Indians have only a “right of occupancy” and hold no title to the land.

National Congress of American Indians: Indigenous Title and The Doctrine of Discovery

Augustine, Sarah. The Land Is Not Empty: Following Jesus in Dismantling the Doctrine of Discovery. Nashville: APG, 2021.

d’Errico, Peter. “Replacing the Doctrine of Christian Discovery and Implementing the United Nations Declaration on the Rights of Indigenous Peoples.”

Newcomb, Steven T.  Pagans in the Promised Land: a Primer on Religious Freedom a short article connecting the discourse of religious freedom to the Doctrine of Christian Discovery.

Paul, Steven  “Because the Bible tells me so’: Manifest Destiny and American Indians”, Indian Country Today, 2018.

Dunbar-Ortiz, Roxanne. Not “A Nation of Immigrants”: Settler Colonialism, White Supremacy, and a History of Erasure and Exclusion. Boston: Beacon, 2021.

Francis, Robert, Two Kinds of Beings: The Doctrine of Discovery And Its Implications for Yesterday and Today. Manataka American Indian Council, 2003.

Heath, Joseph J. The Doctrine of Christian Discovery: Its Fundamental Importance in United States Indian Law and the Need for its Repudiation and Removal. 10 Alb. Govt. L. Rev. 112 (2017)

_____. A Brief History of Haudenosaunee Treaty Making and The Obligations of the United States to Protect Haudenosaunee Lands and to Not Disturb the Free Use and Enjoyment Thereof.

_____. The Citizenship Act of 1924 was an Integral Pillar of The Colonization and Forced Assimilation Policies of the United States in Violation of Treaties.

_____. Statement on the Historical Use of the Doctrine of Christian Discovery by the United States Supreme Court Since 1823.

Twiss, Richard. Rescuing the Gospel from the Cowboys: A Native American Expression of the Jesus Way. Downers Grove, IL: InterVarsity, 2015.